Review: 'Survive the Night' is a sign of our times 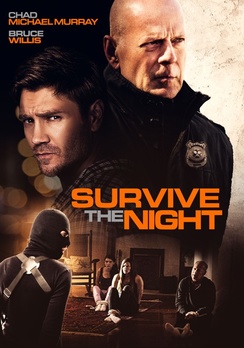 Welcome to COVID cinema 2020. May we suggest either the tired retread of a film that everyone loved five years ago or the third direct-to-video sequel of a film that has nothing to do with the supposed franchise?

The reality is that today's home entertainment offerings in the physical media realm are as paltry as they were during the height of the Hollywood writers strike from 2007-2008. But this time, Hollywood had even less time to prepare and it seems that the old shelves are barer now than ever before.

It seems that Hollywood has a neverending supply of these types of films, but if their lack of quality is any indication, that well might be running dry. And yet, thanks to the shuttering of cinemas across the country, these offerings are scheduled to be the biggest titles to come home in the next few months.

With no end to COVID-19 on the horizon, it is anyone's guess as to when they will reopen the megaplexes and allow the flow of theatrical-grade films to start up again. Until then, we are stuck with smaller films and direct-to-video dregs that are being asked to carry more of a load than they were ever conceived to muster.

When two brothers that are already on the run from the law get caught up in a gunfight at a gas station, the bodies start to pile up. One of them is shot in the leg and they must find alternative medical care or risk getting caught, or worse. They follow a country trauma doctor back to his secluded house, but they get more than they bargained for when they break in and threaten his family in return for his emergency surgery skills.

If this setup sounds familiar, you're not going crazy. The plot seems to be a mashup of The Strangers and Don't Breathe. Unfortunately, all of the film's money went to securing a few lines from Bruce Willis and none of it went to the script.

To be fair, I don't believe Lionsgate ever foresaw a future where Survive The Night would be one of the best offerings for any given release week. And yet, the raging global pandemic has brought us to this place. So, while the review that follows will seem a bit biting, do keep in mind that much like asking an outfielder to toe the mound in baseball, it's not really fair to expect a miracle.

The problem is that in a normal week of releases Survive The Night would be a strong secondary title that would be able to shrug off these nitpicks. But, it's more difficult to cover the blemishes when the spotlight is dead on full.

Aside from Bruce Willis, the only other star in the film is Chad Michael Murray who plays his son, the disgraced surgeon facing an ethical dilemma made easier with a gun pointed at his family. Other than One Tree Hill, I couldn't name a single other credit on his resumÃ©, yet he has a certain cachet in the younger crowd.

The problem is that Chad's character isn't all that endearing. His wife doesn't really earn any favor with the audience either, so when they become threatened, we almost end up cheering for the bad guys. And it's not like they didn't spend a great deal of time with character development either.

That's probably my biggest pet peeve of the film, the pacing is terrible. Not only is it slow, but they spend time on the wrong characters. The film starts with the brothers having committed some sort of grand robbery, but their haul is less than they thought it would be. And that's it.

The film had a chance to shift some of the development away from the innocent family and they blew it. The brothers are painted as one-dimensional sociopaths (one of them at least), but if the story had spent more time with them early on, perhaps it would give us an added layer of nuance that could later be leveraged for suspense.

Instead, the film predictably goes through the motions and the only thing I was hoping for was to see the credits. They can't come quick enough for my taste and I was left with a bad taste in my mouth.

Unfortunately, the current slate of releases is so thin that this might be as good as it gets for the foreseeable future. That is truly sad, but perhaps it will force us to seek out those hidden treasures among the rough that would otherwise be lost in the noise. Survive The Night just isn't that gem that the box art would have you believe that it is.

Survive The Night is now available on Blu-ray and DVD.