Review: 'Legacy of Lies' leaves little legacy of its own 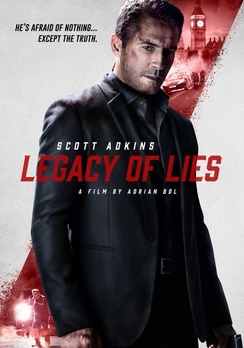 I have to admit that I spent way too much time googling Legacy of Lies writer/director Adrian Bol. It wasn't so much that his feature film debut blew me away, but I was convinced that he was the long-lost son of famed German director Uwe Boll.

I was so far down the rabbit hole of tinfoil hat territory that I was convinced that the younger Bol had spliced off an "L" from his last name in a fit of spite that would be so on-brand for the elder, fiery German filmmaker. But alas, my queries were for naught and even though there is a slight resemblance if you squint at just the right angle, they are indeed not related at all.

Perhaps the younger Bol spent time watching Uwe Boll's films growing up because as Legacy of Lies progressed, I was more convinced of my fledgling hypothesis. Of course, mimicking one's filmmaking techniques does not make one a master. And let's face it, no one should ever aspire to be Uwe Boll.

An ex-MI6 operative is reduced to fighting in underground MMA fights and being a bouncer when his last mission goes fatally wrong. Now, he struggles with regret as he raises his daughter as a single father, but the past won't die. A reporter enlists his help to solve a cold case and the unfinished business in his past rears its ugly head once again.

We live in a weird place right now. If COVID weren't flaring across the country and we had a normal selection of new releases, Legacy of Lies wouldn't merit more than a nominal mention of other new releases. But suddenly, the dearth of titles has artificially propped up this movie's audience.

For instance, this week could have featured the home debut of No Time to Die, but it wasn't meant to be. Instead, we are literally scraping the bottom of the barrel, and Legacy of Lies is this week's "winner."

To be fair, if you're jonesing for mindless action with little mental aerobics required, Legacy of Lies certainly fits the bill. But, on its own merits, the movie has plenty of logical holes and narrative misfires that are grating at best and completely annoying at worst.

I will give young Mr. Bol credit as he certainly isn't afraid to dream big. The international scope of the film will add credence to an American audience, but it doesn't take long for the film's own thin plot lines to collapse on themselves.

Billed as a poor man's Jason Statham, Adkins has most of the main ingredients of an action star, but he's just missing that little nugget of something that the truly gifted possess. Adkins' biggest weakness is that he doesn't appear to have the acting chops to carry the heavy emotional scenes, of which Legacy of Lies has more than its fair share.

At times the movie tries to crib its action sequences from the John Wick franchise. This is a good strategy as Adkins' acting skills do tend to mirror the emotional void that is Keanu Reeves, but the film's bottom basement budget is magnified during these sequences.

There are two main "killing sprees" in the first half of the movie and it's woefully apparent that they spent a great deal of time choreographing the violence because you can actually pick out various thugs leading the action before Adkins is able to properly dispatch of them.

But again, in a COVID world, the B-movie action film is king and you do a lot worse than Legacy of Lies. The two bright spots of the film belong to the fresh-faced actresses playing the daughter and journalist. Yuliia Sobol is a young cyber Woodward and Bernstein that would be comfortable in a Girl with the Dragon Tattoo movie.

I will be honest, I was not familiar with Honor Kneafsey before this film, but I got very similar vibes from her performance as I did when I watched a young Natalie Portman cover similar territory in Leon, The Professional. Ms. Kneafsey's future is indeed bright and it wouldn't surprise me at all to see her in more Hollywood films moving forward.

At the end of the day, your mileage will vary with Legacy of Lies. It's far from the worst film that I've seen this year, but I had a hard time keeping my attention on it. Suffice to say, with the lack of competition in the marketplace, I predict this one will overperform expectations and that's not a bad thing.