Review: Nickelodeon doubles down on 'Are You Afraid of the Dark?' 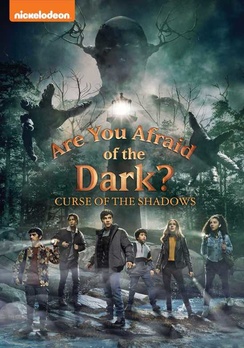 Normally, I'm pretty opposed to remakes or reboots or re-whatever the popular term is these days for regurgitating old content simply to capitalize on the passing of time, but I was wrong last time. Would the second reboot season of Are You Afraid Of The Dark? pass muster?

In a word, yes. In other words, Nickelodeon did something that I didn't think was possible for their network. They took a darker reboot and made it even darker with more scares. The Curse of the Shadows series simply doesn't bring a few spooks for the kiddies, but actually molds itself into hard horror lite for tweens looking for a bridge between the kid stuff and the hardcore horror films.

A new setting and a new midnight society bring fresh scares when the group's leader suddenly vanishes, prompting the remaining members to search for clues, confront dark forces, and ultimately uncover the truth behind their seaside town's terrifying curse.

As I mentioned, this updated Are You Afraid of the Dark? is geared for those that grew up on horror films from a much-too-young age and is looking for some scary thrills to pass the time. In short, this is precisely the TV series that I wished existed in the 1980s when I was a pre-teen/teen and fully immersed in the horror culture.

But this doesn't mean this show is for everyone, despite the family-friendly Nickelodeon label on the front of the box.

If you're wondering if Are You Afraid Of The Dark? is appropriate for your 9-year-old daughter, I'm going to answer, probably not. Your mileage may vary, but I was surprised by the terror factor and my daughter is still in shock from the horrors of last year's reboot series.

The miniseries features plenty of nods to the original series that ran for seven seasons and really helped to usher in a whole new generation of horror film fanatics. What I found endearing is that there is sort of Scream element to the show where they realize that there are rules afoot, but yet they are forced to put themselves in harm's way anyhow.

The cast is a bunch of relative unknowns to an old fogey like me, but I'm sure the tween set will recognize them from various Nickelodeon shows. But like any good horror film, name recognition isn't really all that important. Also, this cast features a whole new Midnight Society with no actors reprising their roles from the last reboot. In fact, the fresh-faced actors were a welcome sight and added an element of unknown to the plot that played out swimmingly.

I found myself comparing this series to both Stranger Things and It where a group of kids is preternaturally called upon to handle situations more suited for a more mature lot. As in those earlier works, the kids prove to be more than up for the challenge and this time they stretch the fun out over six episodes as opposed to last season's three. This added content allows them to fully develop this story and add in more elements that make this series so much fun.

Despite the success of the first two reboot seasons, Nickelodeon has yet to officially renew the series for a third season. This is ominous, but you shouldn't read too much into that. Series like these are easy to ramp up quickly, so I wouldn't be surprised to hear of a renewal soon with new episodes airing in early 2022.

Either way, Are You Afraid Of The Dark? Curse of the Shadows is a worthy addition to the lore and I hope we get to see more from the franchise moving forward. I like the darker direction it seems to be taking and if somehow Nickelodeon passes on it, I could see it being brought over to a streamer like Netflix.

Are You Afraid Of The Dark? Curse of the Shadows is now available on DVD.