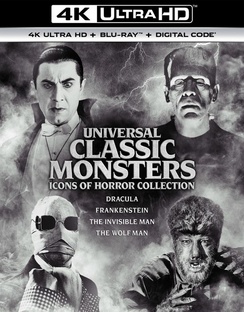 Long before the Marvel Cinematic Universe existed, or color TVs for that matter, Universal enjoyed a lucrative run with their "Classic Monsters" series of films. These films are the classics upon which an entire genre sprouted. If you are a fan of today's horror films, then you must pay homage to the trailblazing films and filmmakers that led the way.

There's only one slight problem with that. In today's ever-increasing digital streaming world, finding these older classic films on services such as Netflix or Amazon Prime is next to impossible. That's because these streaming services tend to ignore anything created before 1980.

On one hand, I get it. Their user base is made up mostly of millennials and, quite frankly, most of them have no idea what "Rosebud" even means. And if they do, it's only because it was parodied on The Simpsons.

No, most kids today have an irrational fear of black and white movies and I'm perplexed by it. Sure, I can appreciate that as technology has progressed, the filmmaking has gotten better, but that doesn't mean that there wasn't a great film made before 1970. Back in the old days, filmmakers had to rely on cunning and skill instead of computer-generated special effects. Yes, some of these techniques might be considered hoky today, but there is still value in appreciating the history of film.

Don't worry, this isn't one of those "Get off my lawn" posts where I tell you that life was better before the advent of cell phones and the Internet. It was, but I digress. No, this review is for the recently released Universal Classic Monsters: Icons of Horror Collection.

A few years ago, Universal released a spectacular set of horror films on Blu-ray called Universal Classic Monsters: Complete 30-Film Blu-ray Collection. That's right, they opened their vault and shed sunlight on 30 classic films that hadn't been released on the new format and it was an amazing collection.

Now, they have gone back and re-released arguably the four most distinguished films in the collection on 4K UHD.

From the era of silent movies through the present day, Universal Pictures has been regarded as the home of the monsters. Universal Classic Monsters Icons of Horror Collection showcases 4 of the most iconic monsters in motion picture history including Dracula, Frankenstein, The Invisible Man, and The Wolf Man. Starring Bela Lugosi, Boris Karloff, Lon Chaney Jr., and Claude Rains in the roles that they made famous, these original films set the standard for a new horror genre with revolutionary makeup, mood-altering cinematography, and groundbreaking special effects.

The release of this collection is perfectly timed with the start of the spookiest month on the calendar. Universal is betting that the unusual lack of a theatrical horror slate (thanks Covid!) this year will spur consumers to reach out for the classics at home in the best format possible.

I must admit that the presentation and 4K transfers are pretty spectacular, but I was sort of hoping for new, exclusive bonus features. I get it, these films are 90 and 80 years old, so securing fresh content is tough to do. But, the better resolution is really noticeable for these black and white classics.

I haven't seen a lot of black and white films in 4K UHD, so I was a bit unsure of what to expect. The good news is that the increased color spectrum with HDR and the deeper black tones really allows for the film to pop off the screen. If you're going to revisit these classics, I really can't recommend the 4K UHD versions enough. They are definitely worth the upgrade.

The really neat thing about the timing of this release - at least for me on a personal level - is that my daughter is just starting to get into horror films. For the almost 10-year-old, there's a steep divide between traditional horror and what I term "tween horror." She's not really into the tween stuff saying that it's for "babies," but I certainly don't want to scare her into sleepless nights for the foreseeable future.

As I was watching Dracula, she wandered into the room and was immediately transfixed by Bela Lugosi's performance. Can you blame her? It allowed me to talk to her about the history of horror and how Universal truly blazed the path of bringing these classic monsters to the big screen in the 1930s and onward. And how all of the horror films of today owe a debt of gratitude to these horror classics.

She was hooked and joined me for the rest of the screenings and while there may have been a moment or two that rattled her a bit, it's pretty tame compared to what both she and my 8-year-old son see in commercials for horror films and TV series on the regular. All in all, Universal Classic Monsters: Icons of Horror Collection is a wonderful collection of movies that will allow you to pass the horror baton onto the next generation.

With the availability of these four classic films on 4K UHD, this et ensures that they will live on in perpetuity for as long as physical media persists. October is the perfect month to enjoy these movies with a little popcorn and plenty of things going bump in the night.

Universal Classic Monsters: Icons of Horror Collection is now available to own on 4K UHD and it makes a great idea for that horror aficionado in your life. 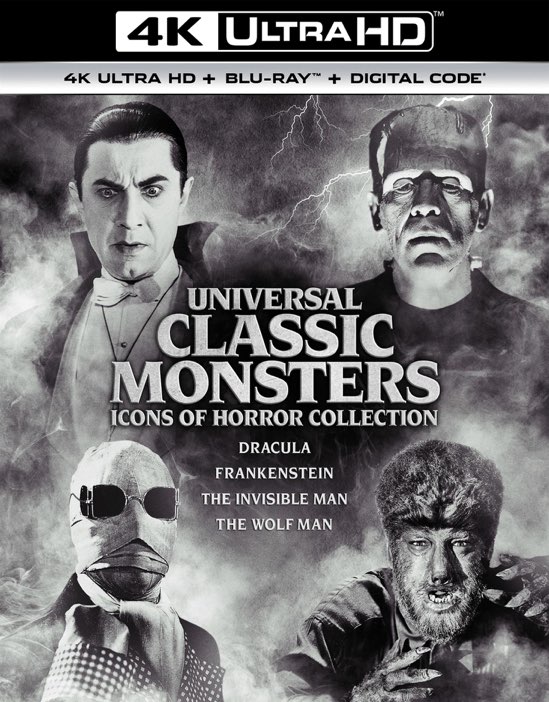