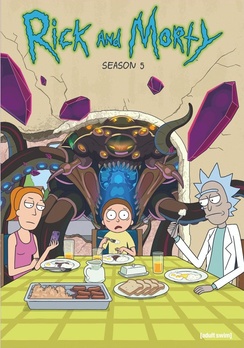 It's no secret that I was late to the Rick and Morty bandwagon, but that won't stop me from being its loudest cheerleader now. The pandemic was a double-edged sword for one of the funniest, irreverent shows out there. On the one hand, it allowed people like me to binge-watch and catch up with the show.

At just over 1100 minutes, you can watch the entire series of Rick and Morty in just under one day. Not that I'd recommend such an insanely dense viewing, but you'd surely be laughing along. But honestly, the time simply flies by.

On the other hand, creating an animated show in the middle of a pandemic creates unique challenges that I never knew existed. Thankfully, there's a featurette exclusive to the physical version of Season Five called "Fighting Gravity" that highlights these obstacles and how they were able to overcome them on their way to creating yet another classic season of their iconic show.

The show follows Rick, a deranged scientist with a drinking problem, and his meek grandson Morty as they travel through different realities and dimensions sometimes saving the world, or the universe or Morty's potential love life. It's a weird show, but one that definitely is both hilarious and interesting. In Season Five, Rick struggles with his purpose in the multiverse and how his actions have had unintended consequences on his family. And yet, this season feels like the first time in the whole series where they are united in their mission to save existence.

We talked in the past about whether the show was simply a bizarre series of fun exploits or if the show had bigger plans for its characters. Was there an over-reaching plot, or was it simply meant to be a "monster-of-the-week" style of show? I think it's safe to say that after Season Five, it's pretty obvious that there's more going on that one would first assume.

The nice thing about the physical versions of the show is that they are chock full of extras and features. This is especially true for Rick and Morty: The Complete Fifth Season. Aside from the previously mentioned making-of feature, there are little vignettes called "Inside the Episode" for each episode, a couple of hilarious features where Dan Harmon and Rob Schrab create random B-storylines and little insights into almost all aspects of creating the show from animation and coloring to directing.

I think that the one thing that resonates most with audiences is how much the creators care about the show and bend over backward to connect with them. Case in point, during the height of the pandemic, they shared the unfinished opening to the first episode of Season Five to give fans a taste of what was to come.

It was a hilarious first look and one that lesser creators might balk at given the unfinished look of the animation, but it was a move that paid off in spades. It also hinted at the larger scope of the series moving forward.

Up until this point Rick and Morty has sort of been a scatological look at science-fiction tropes and how to usurp them for the maximum amount of comedy. While that mythos will surely reverberate through the show's entirety, I think it's also a sign of a show's maturation when it's ready to move beyond pure silliness in order to give the show a greater purpose.

That purpose is starting to come into clarity with Season Five, but it truly does raise more questions than answers. At this point, it's probably best simply to enjoy the ride and not think too hard about where the show is going.

No matter where it ultimately ends up, the ride has been fantastic and Season Five is up to the challenge. In these times, we need something to distract us from the chaos we see outside our windows and while I will stop short of saying we should look up to Rick and Morty, their presence in our lives is certainly making it much more hilarious.

Rick and Morty: The Complete Fifth Season is now available on Blu-ray, DVD, and Steelbook Blu-ray.