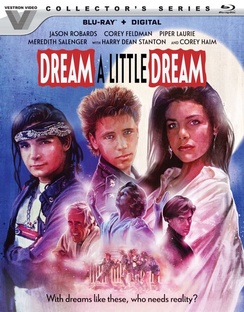 There are a few moments in a young boy's life when he comes to understand what it means to be a man. For me, one of those moments was when Meredith Salenger dances in Dream a Little Dream.

I was no longer a boy, but not quite a man.

You see, like most tweens in the late 1980s, I was absolutely obsessed with the Two Coreys, Corey Haim (RIP) and Corey Feldman. The Lost Boys and License to Drive were two films that would have been on constant rotation had streaming existed back then.

Nonetheless, I recorded them when they debuted on HBO and I'm sure I wore out those VHS tapes. Those were the days.

Of course, a lot has changed since 1989 when Dream a Little Dream was released. That film was arguably the start of the fall of the Two Coreys from grace. While they would go on to star in a half dozen more films together, none of them would come close to reaching the heights of this trifecta.

But, Dream a Little Dream was different. It wasn't your typical Hollywood film and it not only aroused certain pre-pubescent thoughts, but it also tingled my interest in films off the beaten path in Hollywood.

It's an obsession that has continued to this day.

Bobby has everything a young guy should: a good buddy, a girlfriend, and parents who love him. When the older couple down the street try a transcendental experiment to extend their lives, they quite literally become trapped in the teen's bodies. This teen comedy has a great cast including the two Coreys â Corey Haim and Corey Feldman, as well as Harry Dean Stanton (Repo Man, Alien), Piper Laurie (Carrie), and Jason Robards (Magnolia).

Considering that I was only a kid when I first watched Dream a Little Dream, I was wondering if the film held up after all of these years. What I discovered is that this wasn't just some sort of body switch Freaky Friday movie, there was so much more going on.

Instead of wondering if the film held up, I found myself having a whole new, deeper experience with the movie than ever before. It was something that really moved me. Of course, it doesn't help that in every scene with Corey Haim you're reminded of your own mortality which really makes you identify with Jason Robards' character.

Watching Dream a Little Dream also filled me with a longing for these forgotten films. They are so much better than the drivel that is being mass-produced for the streamers these days.

But it's refreshing to see these classic films find the light of day on Blu-ray. Unlike most streaming options, these physical goods come with a bevy of special features and Dream a Little Dream doesn't disappoint.

The Blu-ray includes a touching interview with Corey Feldman and a separate interview with executive producer Lawrence Kasanoff that truly cements the film's place in pop culture. There are also a plethora of trailers, stills and TV commercials to flesh out the package.

At the end of the day, putting in this movie was like taking a time machine back to that moment when innocence was still a virtue. We've come a long way since this movie was released, but not all of it has been bad.

In today's uncertain times, it's good to be able to throw this film in and relive a bit of our childhood on our TV screen. I really hope that Vestron continues to plumb their vaults for these type of classic films.

Dream a Little Dream is now available on Blu-ray.