Review: 'American Carnage' shows off the horror of politics 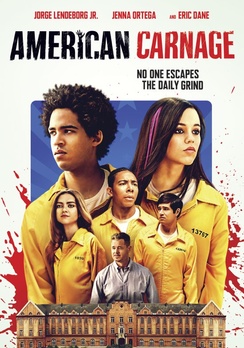 I am as big a fan of horror films as you will find. Heck, I've even created a horror podcast with my daughter. So, when the opportunity to review a horror movie comes up, I'm always like a kid in a video store in the mid-1980s.

Enter American Carnage and director Diego Hallivis who, along with his brother Julio, is making a name for himself in the horror genre. While the pair hasn't quite reached the heights of Jordan Peele, they are quietly building a resumÃ© on the cusp of breaking out with widespread success.

American Carnage is their horror homage to Hispanic culture in much the same way that Peele was able to redefine the horror genre for African Americans. However, the main difference between American Carnage and Get Out is the driving parallel in American Carnage between the horrific fictional details in their movie and the very real horror politics playing out all around us.

After a governor issues an executive order to arrest the children of undocumented immigrants, the newly detained youth are offered an opportunity to have their charges dropped by volunteering to provide care to the elderly. Once inside the eldercare facility, the volunteers discover the governor and the facility's supervisor have cooked up a horrifyingly depraved conspiracy that endangers the young and the old in this twisted thriller-comedy.

While the movie doesn't specify which state Harper Finn is the Governor of, it's clearly Texas. From the oversized cowboy hat to that state's obsession with the southern border, the film doesn't need to harp on which state is in the crosshairs because the opening montage is clear that the whole country is at risk of devolving into this sort of police state.

I mean the filmmakers include a snippet from former President Trump's inauguration speech from which they derived the film's title, so it's pretty clear that this film is as much a critique of the United States as a whole as opposed to a singular state. Once known as the melting pot of the world, the United States is quickly becoming more isolationist in its policies and seems hellbent on closing its borders, despite being formed almost solely by immigrants.

It's in this disconnect that the events of American Carnage play out. Forget the rest of the film, the opening salvo alone is horrific enough to make me want to check my shorts. I've never understood the obsession with immigrants - legal or otherwise - and how it's come to encapsulate so much of our country's political identity.

The one defining aspect of being American is the ability to come together and bring together different people to form a more perfect union. The idea that the American dream has been usurped and replaced by American fear is a sad concept to ponder, yet, here we are. It seems like every day, we move further away from the path of the founding fathers into something that is xenophobic at best and pure racist at worst. It's not a good look and something that the Hallivis brothers communicate effectively.

With these Purge Forever vibes going on, I was rather surprised when the film took a more sinister, darker turn towards traditional horror elements. American Carnage really plays as two horror films combined into one that has mixed results in delivering upon its promise.

I won't give away the twist, but if you have keen eyes in the trailer above, it shouldn't be too difficult to suss out. While I appreciate the mighty swing for the fences mentality, I wonder if the film would have been better served to contain its plot to its central message.

I did appreciate the parallels that the filmmakers drew between foreigners and the elderly. Both groups are under fire by the same ideological political leanings of a certain U.S. political party. Whether it's building a wall or gutting social security, it's clear that the film believes that both groups could find themselves as enemies of the state in the not-too-distant future.

Ultimately, American Carnage is the type of film that will be appreciated by a certain audience but ignored by the audience that needs to hear the movie's message. It is a further progression by the Hallivis brothers and it shows their continued evolution as filmmakers. This evolution is one that I'm excited to watch as they mature into what should be pretty reliable genre standouts.

Finally, I couldn't end this review without mentioning the wonderful performances turned in by Jorge Lendeborg Jr. and Jenna Ortega. While Jorge hasn't quite blown up yet, Jenna is having herself quite a fabulous year and her inclusion here will almost undoubtedly lend credence to a cult-like following that this film will almost certainly have in the years to come.

American Carnage is now available on Blu-ray and DVD.