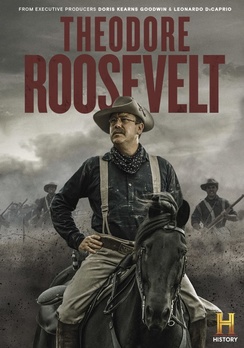 If there's one thing that the History Channel does really well, it's producing historical docudrama films that educate and entertain the audience. Leonardo DiCaprio and Doris Kearns Goodwin have produced these shows on George Washington and Abraham Lincoln and are now turning their sights on Theodore Roosevelt.

The youngest U.S. President ever to take office, Roosevelt has cultivated an aura of mystique over the last 100 years. This show gives the audience a deep dive into the facts and fiction of his life as well as a new perspective on his legacy and what it means in the current political landscape.

Republicans today like to claim that Abraham Lincoln was a member of their party, as was Roosevelt, but it's pretty clear that the values of today's Republican party would be foreign to these gentlemen. Roosevelt started to see the shift during his Presidency as he fought for anti-trust laws and more progressive social reforms that would be more on the Democrat side of today's political leanings.

In fact, Roosevelt created the short-lived Progressive Party in 1912 and ran for President as a third-party candidate. This move siphoned enough votes away from incumbent President (and former Roosevelt protege) William Howard Taft allowing Democratic nominee Woodrow Wilson to win the Presidency. Roosevelt finished second in the popular vote for President in 1912, marking the only time in U.S. Presidential politics when a third-party candidate earned more votes than one of the two main political parties.

Executive produced by Pulitzer Prize-winning author Doris Kearns Goodwin and OscarÂ® winner Leonardo DiCaprio, THEODORE ROOSEVELT explores the life of one of history's most fascinating figures â a cowboy, soldier, statesman, conservationist, adventurer, reformer, author, and finally, U.S. president. Featuring over five hours of expert interviews, rich archival material, and vivid live-action sequences, this two-part documentary charts Roosevelt's journey from his sickly childhood to being a champion for the working man to becoming, at age 42, the youngest president of the United States, whose legacy and impact on progressive political policies reverberate today.

Going into my review of Theodore Roosevelt, I was fairly well-versed on the 26th U.S. President, but much like the earlier shows in this series, it became apparent quickly that I had much more to learn. That's another wonderful aspect of these docudrama films, they entertain and educate. I daresay that even the most robust casual fan of Roosevelt would learn something new in this film.

The History Channel does a wonderful job incorporating scripted dramatizations with documentary-style interviews with historical experts. It really has become the channel's bread and butter over the years and they've consistently set the bar higher and higher with the release of each new program.

Perhaps the most daunting aspect of Theodore Roosevelt is how to fit the enormity of his life's work into a scant 278 minutes. They could have doubled the running time of the show and there would still be aspects of Roosevelt's life that would still end up on the cutting room floor.

That said, the filmmakers worked diligently to try and touch on as much of Theodore Roosevelt's life and legacy as they could in two episodes. The result is a balanced and rather deep dive into his politics and his impact on the world.

An enigmatic and sociable person, Theodore Roosevelt would have been an iconic politician in today's landscape. I could certainly see him embrace social media to get his message out and his popular policies would result in high approval ratings that the politicians of today only dream about.

Theodore Roosevelt wasn't without his naysayers as the titans of modern business of the time such as J.P. Morgan and Rockefeller were hardly fans. That said, Roosevelt was an iconic President that many feel was among the best to ever hold that office and it would do the country so much good to find someone in his mold to lead this country back to a place of high standing.

But, this review is hardly a place for me to get bogged down in politics, but when you're talking about Theodore Roosevelt, it's hard not to get excited. Whether you're an expert on turn-of-the-19th-Century U.S. politics or you're too young to know better, Theodore Roosevelt will have something for everyone.

It will be interesting to see where they go from here next. I would expect that another Roosevelt might make the list or JFK, but no matter which President next gets this treatment, we will be the ones to benefit from the filmmakers' hard work.